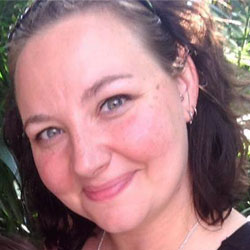 Recently, Tesha Rosario made a bold move for her business. After 15 years with ACI, she decided to join a la mode. During our interview, she weighed in on the advantages of TOTAL for Mobile over ACI Sky and how she could get a report done in 24-hours because of it. Plus, it only took her two weeks to learn all of it.

How long were you with ACI?

Tesha: I remember my parents using it on a 3 ½ inch disk, so I really grew up using it.

Why switch to TOTAL now, after all these years?

Tesha: My biggest pull was mobile. It’s just me, so my workflow is really steady, but I still wanted a way to shortcut a lot of the legwork. And that’s what TOTAL for Mobile™ provides me with – a fast way to get work done in the field. When I get back to the office, the report is already halfway done.

Did you use ACI Sky?

Tesha: I did, but it was hit or miss every time. It was not user-friendly. I had been with ACI for so long, that they let me know it wasn’t quite up to par, but that they were working on it and trying to get it there. Unfortunately, I didn’t have time to wait.

What do you like most about TOTAL for Mobile?

Tesha: Sketch and photos. If there are any discrepancies, I don’t have to be at my desk three hours later dealing with it. I can take care of everything on the spot.

I have saved myself trips because, with condos, the county doesn’t have records I can verify while I am in the field. With the app, I don’t have to call a poor homeowner and say, “I know I was just there, but I need to come back.” You can double-check before you ever leave the property.

What is it about the pictures that you like so much?

Tesha: Before I switched, I was using my clipboard and my phone for photos. I was wasting at least 20 minutes attaching the photos to the report when I got back to the office.

Now, my photos and labels are all there and ready for me to use. I can do a grid and quickly count my bedrooms and bathrooms. I can go to forms and check that I have my photos and am not missing anything, which is a lot better than getting back to the office and realizing I don’t have something.

You seem to have a great flow and have gotten it down pretty fast.

Tesha: Yeah, it only took me about two weeks.

Of course, you have everybody going “Don’t forget you have a learning curve, you can’t just jump in a new software.” And I’m like “I got this!”

How many reports do you do a week?

Tesha: Roughly four to five. I am a small shop, so I don’t have to run myself ragged. With TOTAL for Mobile, I could technically get one done in under 24-hours.

“I am a small shop, so I don’t have to run myself ragged. With TOTAL for Mobile, I could technically get one [report] done in under 24-hours.”

For example, I got an order one morning, so went out to the property, and came back with my photos and sketch already done.

Then, I plugged in a few little extra things and did my comp search. After that, I uploaded the report back to TOTAL for Mobile, and finished by going out to shoot my comp photos. When I came back to the office, all I had to do was upload the report to TOTAL.

That’s excellent! In regards to using TOTAL, our desktop formfiller, would you say after about 8-10 reports you felt comfortable?

Tesha: Yeah, my first phone call, the Welcome Call, I felt bad because I had already played around with the software. TOTAL is definitely user-friendly.

Like I said though, I grew up in an appraisal office helping appraisers with their software. So, I had a little bit more background. When my parents first had their office, everything was done with a piece of paper, ruler, and a film shop.

Once everything switched to computers, we had a lot of appraisers going HUH?! And I was there showing them what they needed to do and how to do it. That was my job for a long while.

It was nice going to a software that I didn’t grow up with, and still knowing how to do things and be just as comfortable using it.

You mentioned doing a Welcome Call. How was it?

Tesha: It was great! He showed me some basics, and things like how to create templates. I even learned a couple of short keys and how to move my comps over.

Once my trial ended, I signed up. My ACI was expiring in four days, but I never renewed because I had gotten so comfortable with TOTAL, and there was no need to have both them running.

Your transition from ACI to TOTAL seemed easy. What about getting your reports?

Tesha: Well, I did have two reports finished in my ACI software that needed revisions. Unfortunately, ACI wasn’t very helpful. Those reports where saved as a shortcut on my desktop but not as an XML. So, when I cleaned up my PC desktop, I got rid of the MISMO files.

Unfortunately, the XML conversion didn't help much, because when I was running ACI, I didn't know that when I would delete the shortcut it would also delete the file. Luckily, it was only two jobs. I did have to retype them completely. And the client understood, so that was good.

ACI wouldn't open it up for me to do one thing to them so $600 wasn't worth it. So, it was a little easier to type it at that point into TOTAL. And since then, I haven’t had any problems. He [Welcome Call rep] did show me how to bring my comps over, I just haven't had the time yet to do it.

Have you called into support yet?

Tesha: I had to call in at one point because I deleted a form that I shouldn’t have, and then some of my photos were deleted, but they showed me how to use the Timeline feature. It took my report back a few minutes prior to me deleting it, and I was able to recover everything, which was great!

Tesha: Not that I’m aware of. I had been with the software so long but never had that happen. It was definitely a lifesaver, because I would have had to go back to the homeowner.

You mentioned that TOTAL for Mobile saves you a lot of time. Overall, how much do you think you're saving per report?

Tesha: Easily 30-45 minutes. I’ve saved 20 minutes by not having to take photos out in the field and then turn around and load photos onto my computer at the office. Or having to resketch what I drew in the field into the sketch program. Because, as I said, if there are any discrepancies, you’re out of luck. For me, I have no problem sitting in the driveway of a home for an extra 10 minutes making sure I have my subject notes while I’m there.

What is your favorite part of TOTAL?

Tesha: My all-time favorite is the SmartAddress. It lets me know the second I put in an address that I’ve used before. That has saved me multiple times. And it’s not even discrepancies -- it’s the retyping too. I type the address in, and it does the rest for me. And I’m like “Yes!! I don’t have to type this one.”

What would you say to a fellow appraiser who’s using ACI, and afraid of coming over to TOTAL?

Tesha: To be honest, TOTAL for Mobile is the only reason they need. It has freed up a lot of my typing time. And the learning curve was not as bad as I imagined.

Like I said, two weeks was my learning curve. And I easily made up that time by not having to sit at my computer attaching photos, redoing maps, and looking through field notes.

“Two weeks was my learning curve. And I easily made up that time by not having to sit at my computer attaching photos, redoing maps, and looking through field notes.”

Okay, one more question. I heard that you loved TOTAL and TOTAL for Mobile so much that while your mom was visiting, you had her sit with you at the office so you could show her all the features. Is that right?

Tesha: Yes, I did. My mom is just getting back into the field, and I told her, “You would not believe the software that I’m trying out right now. You’ve got to look at this.” I showed her how SmartAddress, the mobile app, and common responses worked.

Since common responses are so important to us, I said “look we can even keep our common responses. We don’t have to retype them every time like we thought we were going to have to.” And she was like “Okay. Well, I think I’m going to go ahead and switch then.”

Her biggest thing at that point was that she had already signed up with ACI because that’s all she had known at the time. So, she did the Buyout Program and that was all it took, she said, “yeah, I’m definitely switching.”

Tesha had a big decision to make. Stick it out with the clunky software she’s used her whole career, or try something new, fast, and industry-leading. The move paid off. She’s saving nearly four hours a week while carrying the same workload.

Learn more about our cloud-based formfiller, Titan Reports, or click here to get started.